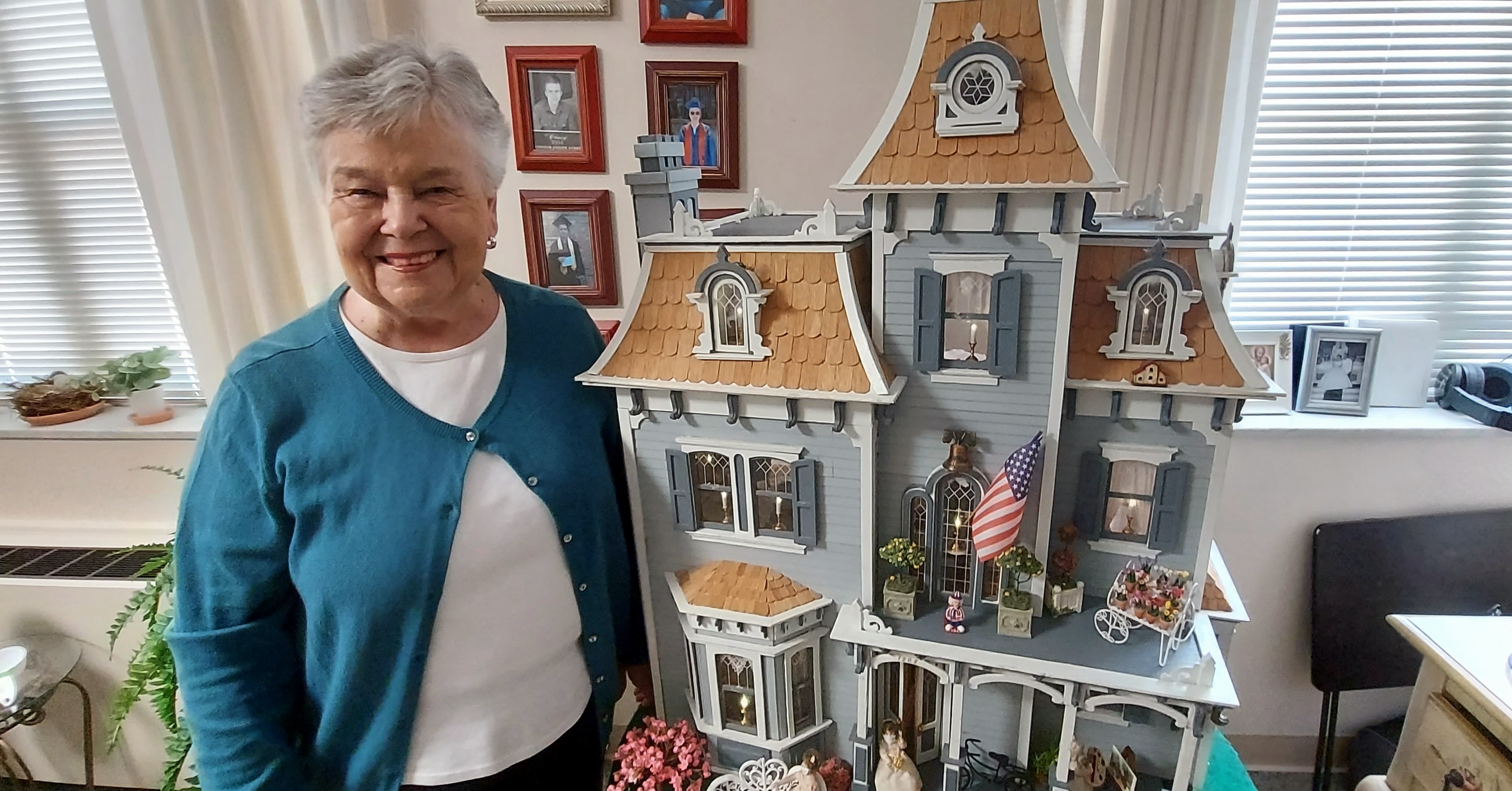 Dollhouses have always fascinated Stella Karl—like many women she had one as a child. But it wasn’t until adulthood that her interest in them grew to a whole new level.

It all started with a few casual visits to a store called Aunt Heidi’s in St. Louis.

“Every time I was in the vicinity, I would go in and just spend time looking,” said Stella. “I ended up falling in love with this one particular dollhouse—I think it was close to $500.”

Thinking $500 was too much to spend on a dollhouse, Stella moved on.

However, fate would intervene.

One day Stella and her husband, John, were visiting family in St. Genevieve when they ran into a man they knew who had taken up building dollhouses in retirement. Touring his basement workshop, they found seven completed dollhouses, one of which was the same Victorian Painted Lady Stella had originally seen at Aunt Heidi’s.

“I asked how much he wanted for it and when he said $250, I said I’d take it,” said Stella. “I told my kids this was my Mother’s Day, my Christmas and my birthday present.”

But getting the dollhouse was just the beginning.

Stella soon began attending nearby miniature shows and subscribed to a trade magazine called “Nut Shell News” in search of the furnishings that would bring her dollhouse to life.

“It’s a real art form—anything you have in real life they can make in miniature,” said Stella.

And what she couldn’t buy, she made.

“I have an array of foods that I’ve made out of clay,” said Stella. “You bake them in your toaster oven and decorate them.”

While Stella has made it clear that when it comes to miniatures, you’re never truly done collecting, she says that it ultimately took her about 15 years to get her entire dollhouse furnished.

“I have every piece I need and then some,” said Stella. “I have tubs under my bed with every season in there, but I’m always looking.”

One of Stella’s favorite things to do with her dollhouse is to decorate it—both inside and out—to reflect the various seasons and special holidays.

“At Christmastime I have about six Christmas trees on the front lawn that are lit up and Santa Claus is at the chimney holding packages … oh, and Rudolph and the sleigh are also on top the house.”

Stella even decorates the dollhouse to reflect current events.

“When the virus started, I made masks and had them on all of the [miniature] family members who were socially distanced around the dollhouse,” said Stella.

When Stella and John moved into the Farmington Presbyterian Manor community, Stella was initially concerned that they wouldn’t have room, but John insisted that they bring it.

Today the dollhouse is a fixture of the community—one that attracts a lot of attention and brings regular visitors to Stella and John’s home.

“I leave the door open so anyone coming by is welcome to visit and see it—a lot of the staff members even bring their kids and grandchildren up to see it,” said Stella.