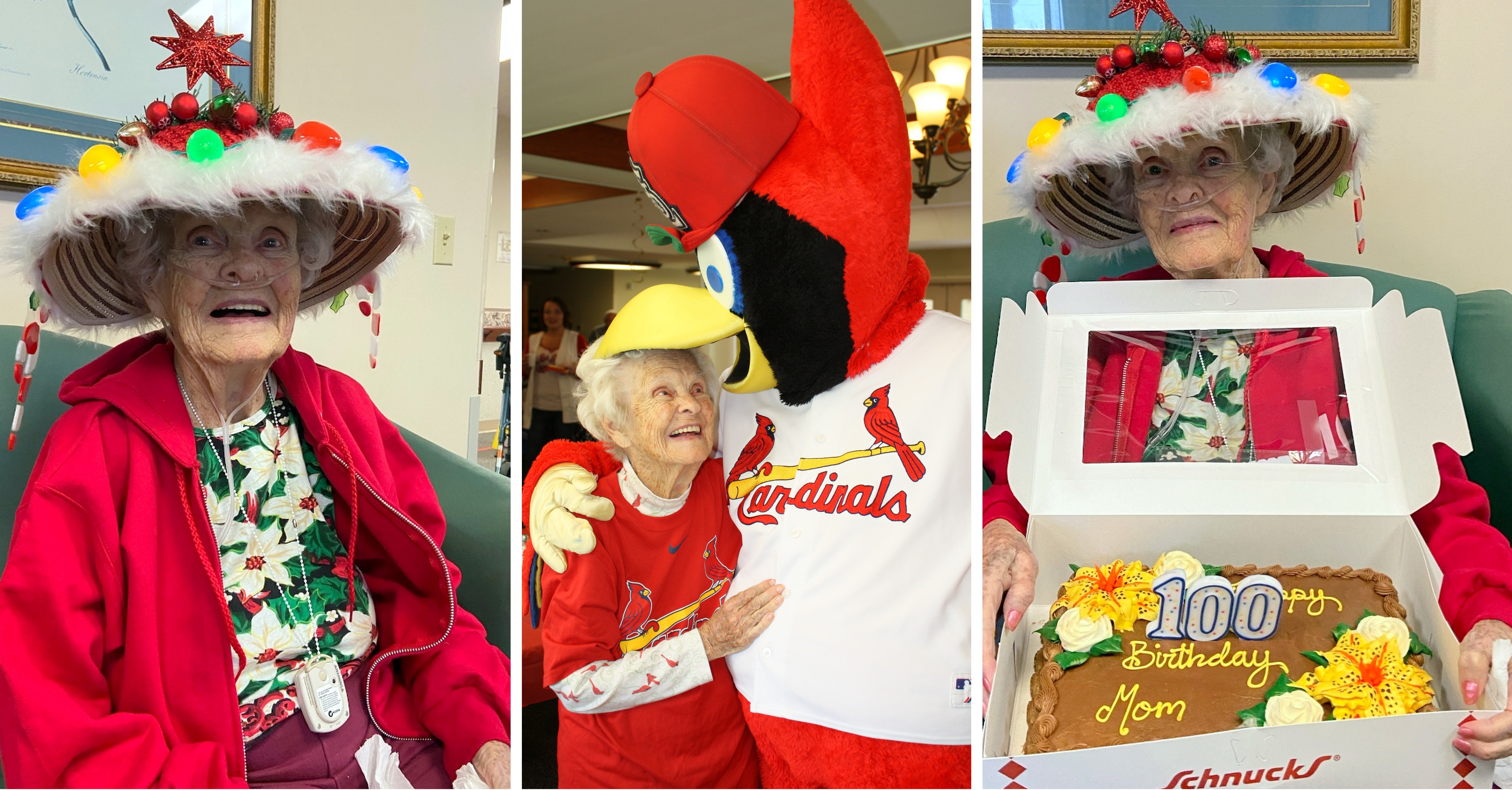 Sweet. Positive. Heroic. Adventure-seeker. These are just some of the words residents and staff have used to describe resident Sally Lorch who passed away on February 14, 2021. In her 100 years of loving life, Sally didn’t shy away from adventure and had an incredible gift at spreading positivity.

“She was a very special lady,” said Carol Winch, life enrichment director. “She loved to travel. In fact, she used to go every year with her family to different places – last year was the first year her family didn’t get together to travel because of COVID-19. When she was in her mid 90s, she rode on a jet ski and also on the back of a Harley! I admired this lady. She said from the get-go, I’m going to live to be 100. And she lived one month past her 100th birthday.”

Sally’s positive attitude and friendly nature could be felt by everyone in the community.

“She volunteered at the gift shop, and she planted the garden in the sitting area for residents,” said Carol. “She’s my hero, that’s for sure. She had the cutest little voice and was always so sweet and just a positive person.”

Resident Glenda Corless remembers Sally as a go-getter. “When she was about 95 or 96, she started to learn how to play the piano. She bought a little keyboard, and I’d hear her practicing when I walked by her room. She wanted to get good enough to play at church services. I had to really laugh about that because she had a lot to learn! She was something else.”

Resident Wanda Chatman remembers Sally’s love for flowers and life. “It was kind of funny, because one day I was picking flowers in the garden for a while and Sally knocked on the window and shook her head no. She said, ‘that’s not a cutting flower garden, that’s a looking flower garden.’ She protected her flowers!”

In fact, Sally admired the red canna lilies growing outside under her bedroom window so much that she never wanted to move her room because she liked having those flowers to look at. They meant so much to her because her family had brought her those flowers to plant. “She loved those flowers,” said Anne.

It’s no surprise that when Sally’s 100th birthday rolled around on January 15, 2021, the celebration would be as special as she was.

Sally celebrated her 100th birthday wearing a hat she had made that was decorated with Christmas lights. “She had a party and a good time,” said Carol. And what was as exciting as the party hat were two very special guests – Sally’s son Dennis from Cape Girardeau, and her daughter Sharon from California. Their visit was made possible through Heart & Soul Hospice’s One More Time program as visitors have not been allowed at Presbyterian Manor due to COVID -19 restrictions.

“She seemed like she was really a person who enjoyed life. Being here 100 years says a lot for a person. Bless her heart. She enjoyed her 100th birthday – that was really neat for her,” said Wanda.

Despite all her adventures and celebrations in life, Sally had said her most favorite, cherished memories were made with her children and grandchildren. She said her family was her most prized accomplishments and possessions.

Sally had also offered a few pieces of advice for living to be 100 years old – don’t take any medications you don’t need, don’t smoke, live a clean life and above all, keep a positive attitude.