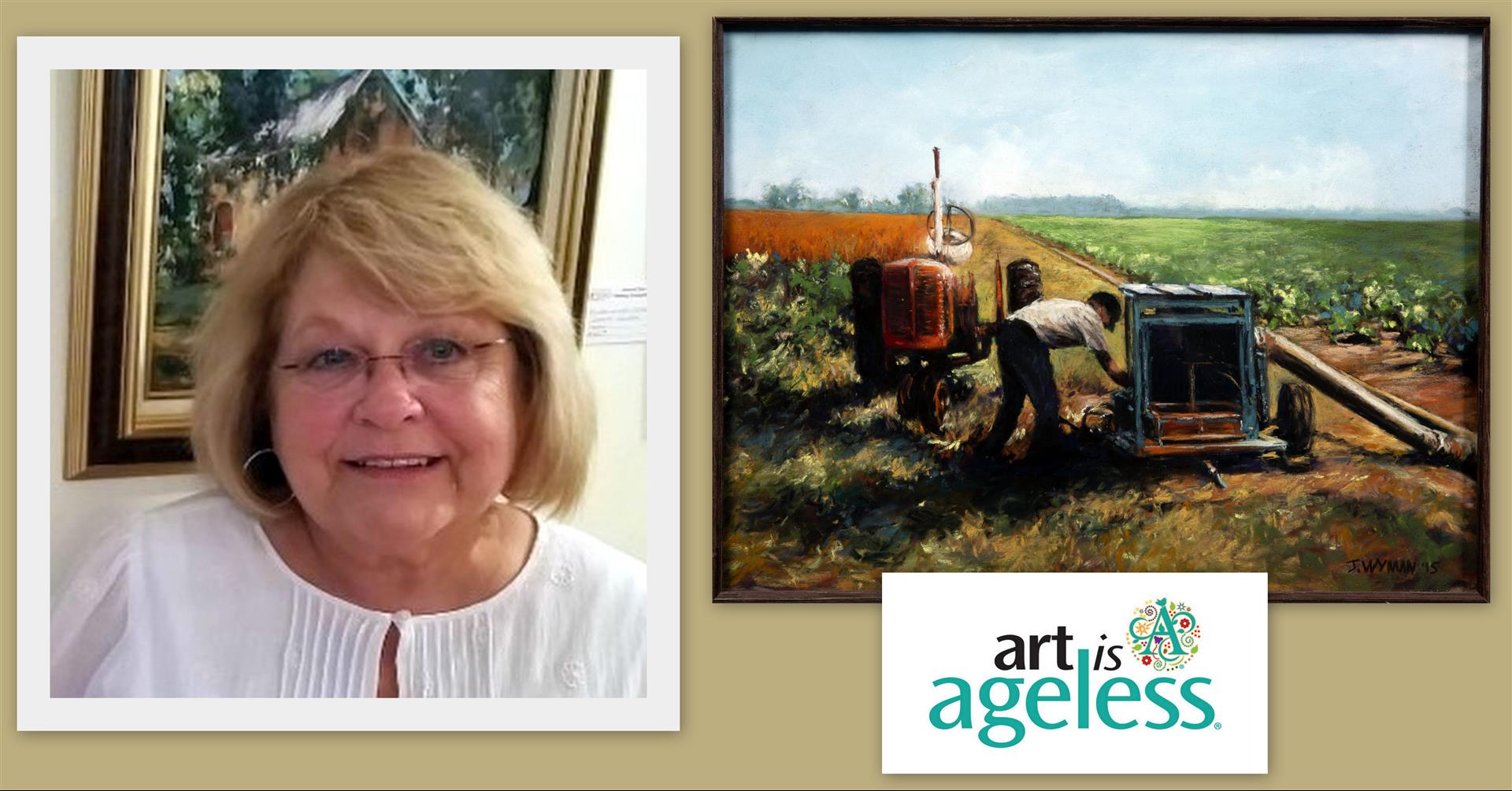 For Juanita Rapp-Wyman, art is a deeply personal thing with every photograph, drawing and painting depicting a scene taken from her own life. It is a process that brings both a level of authenticity to her work, and, in the case of her drawing “Farmer Working on His Irrigation Pump,” awards.

Named this year’s “Best of Show” in the professional division of the Art is Ageless® juried art competition, “Farmer Working on His Irrigation Pump” is based on a photograph taken of her father-in-law working on the family farm. While the piece is a tribute to him and other farmers of southeastern Missouri, it is also a representation of Juanita’s desire to actively preserve the world she sees around her.

“I love to paint the American heartland and recreate scenes of rural life in the Midwest,” said Juanita. “I see myself creating a documentation of everyday American life and its people as I view it.”

The fact that the subject of the drawing is someone that Juanita herself both knew and loved is something she thinks only adds to the overall quality of the piece.

“It makes it easier to paint if you know your subject matter well—you put a little more feeling into it, and I think you can tell,” said Juanita.

Like “Farmer Working on His Irrigation Pump,” many of Juanita’s drawings begin their lives as photographs, and she is constantly on the lookout for inspiration, both in and around her home hometown of Ste. Genevieve, Mo., and as far away as the German countryside.

“I take hundreds of photos when I travel, always with an eye on a future painting,” said Juanita.

A retired art teacher of 30 years, Juanita has enjoyed the opportunity that retirement has given her to finally “practice what she preached.” Over the years, she has worked in a variety of mediums, an experience she feels is coming through in her current chalk pastel work.

“After spending time doing scenes in oils, I went back to pastels and my technique had evolved into something different,” said Juanita. “My chalk pastels are now ‘painterly’ looking—they resemble my oil paintings.”

Juanita has been competing in Art is Ageless® for six years and this is the second time she has won “Best of Show.” For her, the art itself is the best reward.

“Being recognized and having the opportunity to compete against people throughout the state is a neat thing to be able to do too,” said Juanita. “But it’s also nice to see that we still have it within us to be productive and do the things we enjoy.”

Posted on
September 20, 2019
by
Cindy PMMA
filled under
Art is Ageless
« Back to Blog