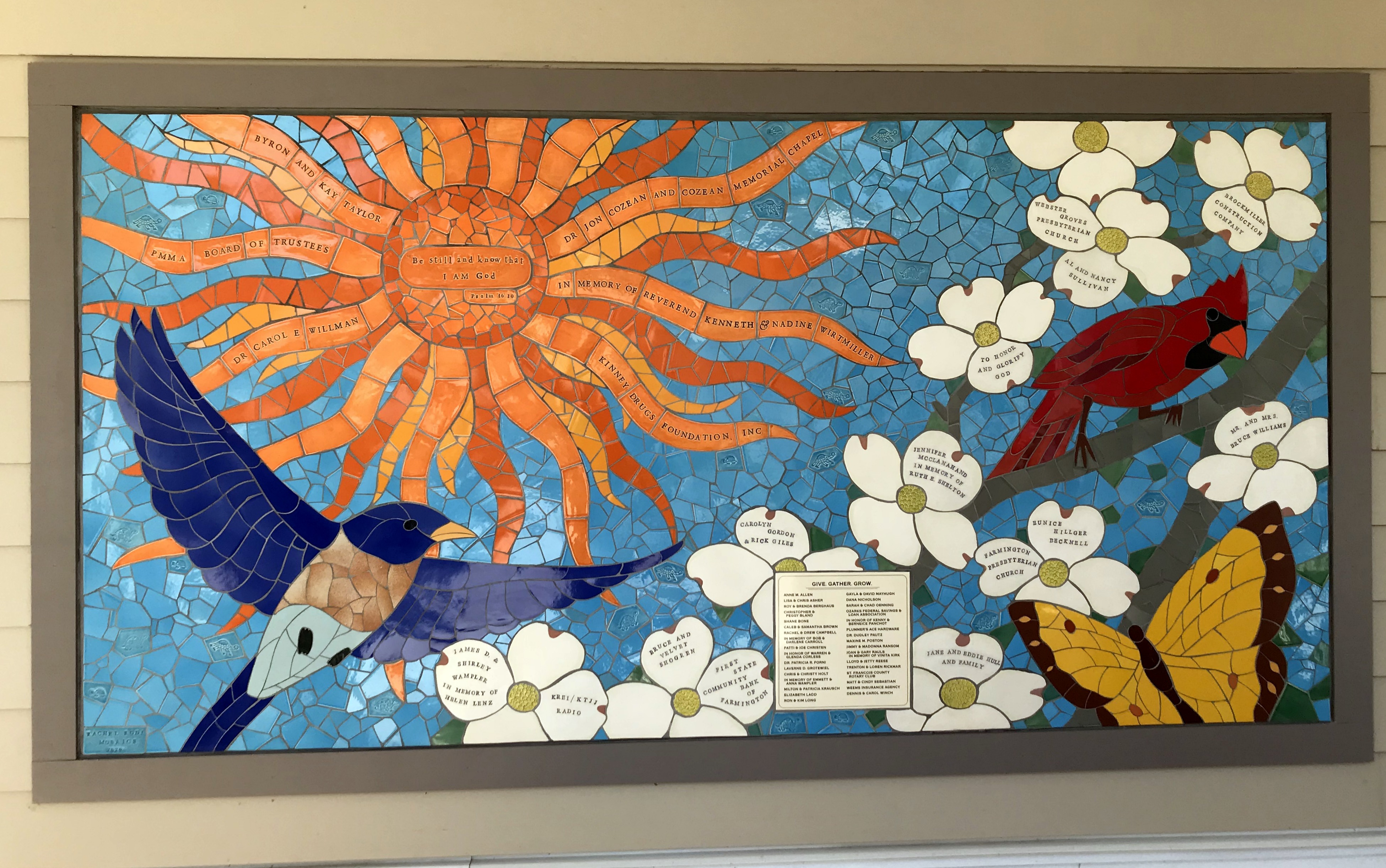 On June 18, final touches were made to the donor wall celebrating the success of the “Give. Gather. Grow” campaign, which raised $1.25 million to build the Hull Family Fellowship Center at Farmington Presbyterian Manor.

The donor wall was created by California-based artist Rachel Rodi and honors donors who gave $1,000 or more to the campaign. Along with the names of the donors, the mosaic tile creation includes various depictions of Missouri flora and wildlife—including some very familiar to the residents and staff of Farmington Presbyterian Manor.

“There is a small garden area at Farmington Presbyterian Manor where the turtle population is very prolific, so we wanted to somehow incorporate that. Being the amazing artist that she is, Rachel came up with the idea to include small turtle impressions throughout the piece,” said Patti Christen, PMMA regional director of development and campaign support staff member.

One of the focal points of the mosaic is a large sun representing the campaign’s $1 million donor that includes the scripture, “Be still and know that I am God,” which has special meaning to the campaign’s steering committee.

“Throughout the campaign, the Steering Committee would speak this scripture to each other, and it was always so encouraging,” said Patti.

For steering committee member Dr. Jon Cozean, the names featured on the wall represent the important role Farmington Presbyterian Manor plays in Farmington and beyond.

“A lot of the residents won’t recognize the names, but what it will show is the community support and also the whole regional support,” said Jon. “The ones that contributed really large amounts shows the faith people had in the mission of the Presbyterian Manor.”

Jon’s own involvement in the campaign, however, was much more personal.

“When my father died and my mother wasn’t able to totally take care of herself, she moved to the Manor and I got involved with the Manor on one of their boards. The more involved I got, the more I thought that there aren’t other communities that compete with what the Manor does,” said Jon.

The unveiling of the campaign’s donor wall means that after two years—and one pandemic—the “Give. Gather. Grow.” campaign is finally complete.

“We have only one thing left for the campaign and that is to finally open the doors with a ribbon cutting and celebration, and we can’t wait to be able to do so,” said Patti.